Renato ‘Sonny’ Levi has introduced many innovations into the marine propulsion field, particularly in fast power-boat design. Among his many accomplishments over the years, Renato Sonny pioneered the “Deep V” hull responsible for the “Delta Configuration” andnumerous variations on this theme.

Since the propulsion system of fast craft plays a very big part in the performance of such boats, it was only natural that he would dedicate considerable thought to this aspect of design also. Whilst appreciating the many advantages of the “Z” or “Stem Drive” marine propulsion system, he felt that the concept was complicated and consequently could be unreliable.

The “power trim” facility unquestionably provided a positive method of trimming a planing boat to the best advantage. This later aspect has become indispensable on fast sports craft and racing offshore power boats. It is unthinkable to run such ‘stern drive’ boats today without this device.

Inspired by this, he developed the ‘Step Drive’ propulsion system towards the end of the 1960’s. The ‘Step Drive’ was adopted by the Drago, the fastest diesel production cruiser at that time. Since then, he has designed over 50 different crafts that use the Step Drive. 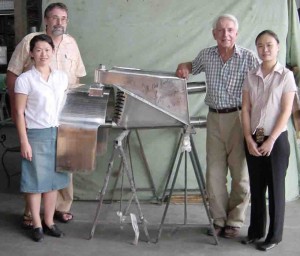 Although extremely fast, the ‘Step Drive’ had several drawbacks such as power absorption at lower speeds was unsatisfactory and maneuverability was poor. To solve this, Renato Sonny began devising a new surface drive.

After years of development, Renato Sonny introduced a revolutionary surface propulsion system that took the design qualities of the ‘Step Drive’ and combined it with the advantages of the conventional ‘Z’ drive. The result is the Levi Drive®.

Mr Scholz gained his academic qualifications in Germany and holds an MBA (Diplom Wirtschaftsingenieur, U of Braunschweig, 1988), postgraduate qualifications in industrial engineering (REFA Ing, Institute for Industrial Engineering in Hannover, 1988), postgraduate certificate in welding engineering (SLV Welding Institute, 1985), master’s degree in shipbuilding, naval architecture and marine engineering (Diplom Schiffbauingenieur, U of Hannover, 1983), and a certificate for building wooden and fiberglass boats (Opelit in Frankfurt, 1972). He has also studied in the Department of Naval Architecture & Marine Engineering of the University of Michigan in the USA.
View all posts by Rudi →
This entry was posted in About Levi Drives and tagged 45 degree transom, levi Side Winder, Levi Sidewinder, Oberflächenpropeller, Side Winder, Sidewinder. Levi Side Winder. Bookmark the permalink.